#SOL16 Who's Ready for Kindergarten?

He hopped down the sidewalk on one foot, his joy and excitement bubbling over with each step. Just across the street we walked, but like another world- kindergarten. The first orientation for parents and students. How strange it was to be on the other side of it now- for ten years, I taught kindergarten and stood at orientations, smiling reassuringly about this milestone. Sitting in the cafeteria and listening to the principal and school specialists talk about kindergarten, I tried to hear what wasn't being said as much as what was. Tears fell as the psychologist read this poem. Letting go is not as easy as I made it sound when I gave the pep talk to parents.

There was a packet and many, many papers. There was a book (If You Give a Dog a Donut) which was lovely, I thought. There was a list of sight words and a conversation about early literacy profiles and being picked up for reading if you  score low. Worry filled my heart, because my sensitive, bright boy is so very hard on himself, so easily frustrated and devastated when he feels he doesn't know something. We are working on it. How will he cope with assessments done early in the year? What will he think if he is found to be in need of remediation in the early days of kindergarten? Why can't we slow all of this down and let them learn without labeling them as behind at the get-go?

And, so, tonight, I put on my kindergarten teacher hat that's been on the shelf since I became a third grade teacher last year. I typed up the words "I can", red for "I" and blue for "can." I told Alex we would be making a book together. He was having none of it and refused for quite a while while I went through the process with his little sister, Megan. Finally, he came around. I cut out the words and positioned them on the paper and had him tape them down. I asked him to tell me what he can do and then I wrote his words and he drew the picture. 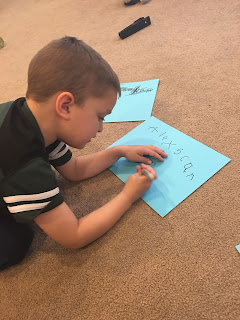 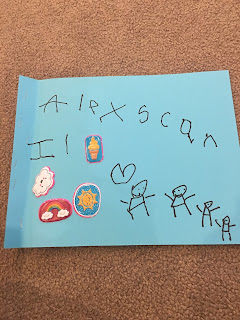 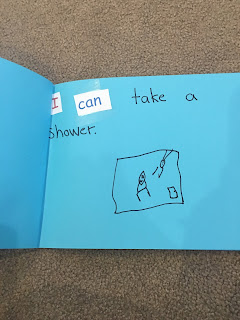 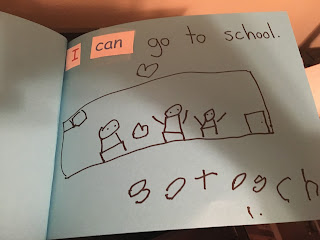 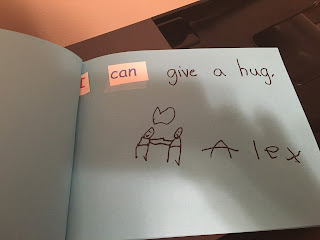 The ideas were all his. I especially loved the hug, with the heart above the two huggers. So, now we have a book that Alex "wrote" and a book he can read. Early literacy lessons implicit were words make up sentences, words go from left to right, words are made up of letters and words and pictures are different. I am hoping to teach him the high frequency words "I" and "can" through this book, as well as increase his self-confidence as a reader and a writer. I hope to throw in one to one correspondence by pointing crisply under each word as we read and reread the book. We can make similar books using different high frequency words.

I hope Alex will make more books with me this spring and summer. I hope he will feel confident and have solid knowledge when he is assessed for his early literacy skills. I hope he will want to hop on one foot, bubbling with excitement, when kindergarten is the reality he goes to each day. I've been the teacher, assessing, noticing, listing who can't write his name yet, who can't follow directions, who doesn't know his letters or sounds. Now, as the mom, I hope Alex's teacher will see the whole child, my whole child, not as a checklist of what he can and can't do, but as a remarkable, curious, loving boy who WILL learn... as he is ready.