Showing posts from July, 2018
Show all

#SOL18 My Summer Self

The training wheels were off. He hopped on the bike and it wobbled to one side. His foot touched the pavement, pushed off and he tried again, wobbling to the other side. The bike veered one way then the other and I held my breath.  Just a few weeks ago, he was adamant that he would NEVER ride a bike. Why should he ride a bike, he reasoned, when he plays baseball? He would never need to know how to ride a bike. He could just follow his friends on his scooter. Bike riding would not be part of his life. I'm not exactly sure how we went from NEVER being a bike reader to trying again, first with training wheels, then without. But tonight, I watched, holding my breath, as a shaky start lead to continuous, exhilirated pedaling.  He rode his bike faster, even riding over speed bumps and navigating turns. I couldn't do it for him, he had to prove it to himself that he COULD do it.  I stood off to the side and cheered for him, my heart swelling with happiness and pride. Another
4 comments
Read more

#SOL18 The Things We Think We Cannot Do

"We must do the things we think we cannot do" -Eleanor Roosevelt  Swirly slides that splash you into the deep part of the pool. New bikes. Swimming lessons with a different instructor. Bikes without training wheels. Keynote speeches written and given. These are the challenges my children and I have been facing this summer. The scary, uncertain things we think we cannot do that are also exciting and exhilarating and make us grow.  Last week I talked about the stories we tell ourselves about who we are and who we are not. Those stories often stop us from doing the things we think we cannot do. It is safer for our psyche to say "I don't need to ride a bike. I will play baseball" (my son) then admit that riding a bike could be hard without training wheels. It might be hard for a while. It might take time to get it right. But if we tell ourselves that bike riding is not for us and we are not the kind of person who could ride a bike, that isn't really
4 comments
Read more

Summer has brought about more time for reading. So far this summer, I read Liane Moriarty's The Hypnotist's Love Story and Jandy Nelson's I'll Give You The Sun. I'm also reading Sara K Ahmed's Being the Change.  All of these books together are making me think about identity and the stories we tell ourselves about who we are and who we are not. When I was younger, I defined myself by what I was "good at" and "bad at." I also thought in comparisons- if my sister was stronger at math than me, it meant she was good at math and I was bad at it. I've assigned traits to myself and also cut myself off from many things because "I'm not the kind of person who..." fill in the blank (cooks well, entertains well, has a good eye for decorating, is crafty, etc.) All of the learning I've done around growth mindset has made me question these long-time beliefs. What if I'm not bad at math? Just because someone has a strength,
7 comments
Read more

#CyberPD Week 1: Learning from Being the Change 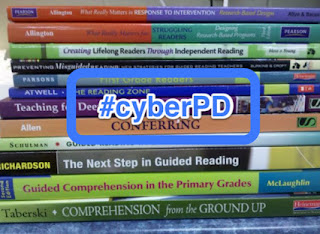 One thing I've come to look forward to each summer is #CyberPD! Reading a professional book and discussing it with other educators around the world has pushed me to grow each time. This year, we are reading Sara K. Ahmed's Being the Change: Lessons and Strategies to Teach Social Comprehension.  Sara defines social comprehension as "how we make meaning from and mediate our relationship with the world"(xxv). As I studied to be a teacher back in the late 90's/early 00's, no one ever talked about this idea. We learned how to teach each academic subject and then spoke about character education as a separate entity. The reality, now that I've been teaching for over 16 years, is relationships and classroom dynamics play into every single thing we teach students. We can't "just teach math"  or any subject without teaching kids how to respect each other, how to really listen, how to disagree and yet still treat each other in loving ways. Lor
1 comment
Read more

I've been preparing for a Keynote Address, which I am so honored to be giving at Long Beach Literacy Day next week (#LBLit18). The speech is on telling your story as a teacher and being an educator who writes- topics near and dear to my heart. As I've been drafting, I've been going back in time and seeing myself at every age and stage of my teaching life. I've also been rereading my blog posts here and digging up my Long Island Writing Project Summer Institute publications.  Isn't it amazing that the teacher who arrives at a classroom is really a patchwork of all that she has experienced? The teacher I was at 22 years old is different from the teacher I am now, 17 years later. More squares have been sown into my quilt. More experiences, more texts read, more conversations, more reflections. The patterns are more intricate now and detailed. I didn't know what I didn't know then- there was enthusiasm, passion and purpose but there was so. much. to. learn.
3 comments
Read more
More posts