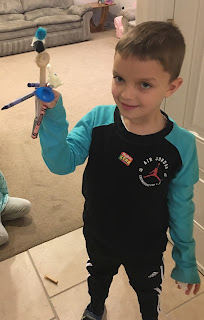 Picture it: (Not Sicily)- A suburban house where an exhausted teacher/mom sits at the kitchen table, dinner cooking, almost four year old daughter chattering on endlessly, and her kindergarten son doing everything but the homework he is supposed to be doing. Ten frames and addition first, then an editing sheet next, where my son is supposed to read sentences, reorder the words so they make sense, add capital letters and fix punctation. (Did I mention this is kindergarten?) Instead, he has fixated on a spoon he has named "Mr. Spoon." He's drawn a face on him. He disappears out of the room and comes back with Mr. Spoon, now taped with crayons, pencils, and a whistle.

The editing sheet is SOOO not happening tonight, so I give in and Mr. Spoon gets new relatives as my daughter insists she needs a Mrs. Spoon. 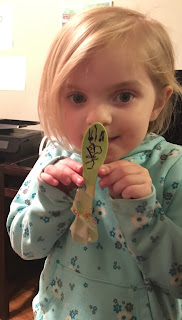 An entire spoon family is created. They laughed, were creative, problem-solved and told stories about the Spoon Family.

As it should be.